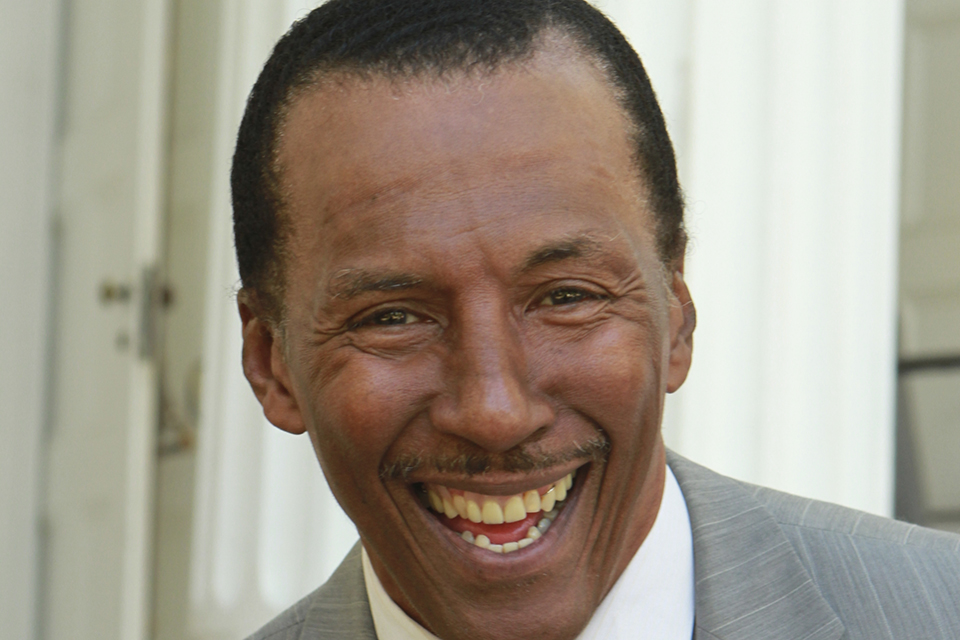 In the early morning hours of December 2, 1967, a lone man entered the Giles Food Market in Baltimore, Maryland, purchased two bags of groceries and left the store carrying one in each hand. He returned a few minutes later to rob the store and kill Robert Brewer, a store manager. Witnesses who observed the crime from a car parked outside the store reported it to a nearby patrolman who arrived as the perpetrator ran from the store. The officer chased him for a few blocks and shot at him twice but was not able to apprehend him.

Walter Lomax became a suspect when he went to the police station voluntarily on December 12, 1967 because he had heard there was a warrant for him and wanted to find out why. There was no warrant for Walter, but later that day police picked up his brother Michael on a warrant for non-payment of child support. Over the next two days police placed the brothers in several unconventional mass line-ups where witnesses to a wave of recent crimes were asked to identify suspects. Some of the witnesses to the Giles Food Market crimes identified Walter from those line-ups. Others did not. With no other evidence tying him to the crime, police arrested Walter and charged him with several other crimes as well. He was not involved in any of them – as a matter of fact, at the time of the crime, he was recovering from an injury that would have made it impossible for him to commit these crimes. There was no physical or forensic evidence to implicate him, nonetheless, he was convicted based on eyewitness testimony.

Walter entered prison illiterate, but during his 39 years of wrongful incarceration he earned a college degree, became editor of the prison newsletter, and wrote and published books of poetry. Because Walter was a model inmate, he earned the privilege of participating in the Work Release Program where he was awarded “Employee of the Month.” He completed 54 home visits to help care for his father without incident. While still incarcerated, he worked with other inmates on a bill presented in the Maryland legislature to end the requirement for the governor to approve parole for all inmates serving life sentences.

Convinced of his innocence, Centurion committed to working on Walter’s behalf in 2001.  Jim McCloskey reinvestigated the case seeking new evidence to support a Post Conviction Relief petition. Working with Baltimore attorneys Larry Nathans and Booth Ripke a petition was filed to Judge Gale E. Rasin who granted a hearing and then vacated his conviction based on actual innocence and ineffectiveness of counsel.  She ordered him freed with Time Served in December 2006, 39 years after his wrongful conviction. Among the reasons Judge Gale E. Rasin cited in the decision were evidence of actual innocence and ineffective counsel both at trial and in the earlier post-conviction proceedings. Walter was eventually exonerated in 2014 after the State’s Attorney’s Office reinvestigated the case and found exculpatory evidence only available to the State. Walter was rewarded compensation from the Maryland Board of Public Works in 2020 for wrongful incarceration. Today, he is the founder and Executive Director of the Maryland Restorative Justice Initiative, a non-profit organization with a mission to advocate and promote humane and sensible criminal Justice and sentencing policies for those incarcerated long term in Maryland prisons.

In the early morning hours of December 2, 1967 a black man shot and killed grocery store manager Robert Brewer at the Giles Food Market in Baltimore, Maryland. Minutes earlier he had purchased two bags of groceries and left carrying one in each hand. A cashier and the night manager interacted with him while he shopped, bringing items to the check-out one piece at a time tying up the register. He was polite when they asked him to finish shopping before they rang up his order.  They were not alarmed when he returned to the store, though Mr. Brewer expressed concern to the other employees that he was behaving oddly.

After several minutes in the store, the man shot Mr. Brewer in the bread aisle then robbed the cashiers. Witnesses who observed the robbery from outside the store summoned a nearby police officer. He arrived as the suspect fled the store on foot. He ran after the suspect, shot at him twice but was unable to apprehend him.

The police investigation did not yield any evidence to implicate Walter Lomax in the Giles Food Market crimes, and some findings which were exculpatory were suppressed.

When police interviewed witnesses immediately following the robbery they described the robber as a black male, but none noted anything unusual about the perpetrator’s right hand. At the time of the robbery, Walter had a plaster cast on his right hand – read on for more information on his injury. All but one said he held and shot the gun with his right hand. In the following days, police interviewed a few potential suspects. There were reports from neighbors that when interviewed, one suspect said to police “Why don’t you look at the Lomax brothers and leave me alone.”

Baltimore had suffered from a wave of violent, armed robberies in the months prior to the Giles Food Market robbery, most of which went unsolved. In the wake of a new wave that included the armed robbery and murder at Giles Food Market, police staged an unconventional series of mass line-ups in an effort to identify suspects. They announced the dates in the local newspaper and invited victims and witnesses to attend. On December 12 and 13, police placed Walter Lomax and his brother Michael in several of these line-ups.

The arrest of Walter Lomax.

Records indicate that without any evidence of his involvement, police arrested Walter Lomax on the morning of December 12, 1967, and charged him with the Giles Food Market robbery and murder and two other robbery – murders; one at The Stag Bar and another at Joe’s Tap Room. Walter had gone to the police station voluntarily that morning because he heard police had a warrant for him. There was no warrant for Walter, but later that day police did arrest his brother Michael on a warrant for unpaid child support. Police placed the brothers in several mass line-ups after their arrests.

Some of the witnesses to the Giles Food Market crimes selected Walter from the line-ups. They were all white, had only seen the armed robber briefly or at a distance and under tremendous stress. The cashiers who had interacted with the perpetrator when he calmly shopped for groceries before the robbery and again when he returned to rob them at gun point and kill Mr. Brewer did not select Walter from the line-ups nor did they identify him later, when they testified at trial.

With no gun and no physical evidence tying Walter to the Giles Food Market crime or the others and only a cross racial identification made after his arrest, Walter faced indictments for seven crimes with which he had no involvement.

Walter was physically incapable of robbing the Giles Food Market and murdering George Brewer on December 2, 1967. On Thursday, November 23, while chaperoning his younger sisters at a dance, a group of young men attacked Walter stabbing him in the right hand and kicking and beating him so severely that he had to be treated that night for his injuries at Johns Hopkins hospital. He returned to Johns Hopkins several times between the attack and the Giles Food Market crimes for additional treatment to his hand. One visit was earlier in the day that the crimes were committed and other visits were earlier on the days of other crimes for which he was accused. On the day of the Giles Food Market crimes, records indicate a fresh, 15 layer cast was applied to his right hand which was swollen to the size of a boxing glove.

His injuries also left him unable to work or care for himself for several days. One of his older sisters, Caroline cared for him at her home until he was arrested.

At trial, Walter’s attorney did not develop the cause and extent of his injuries well enough to convince jurors he did not commit the crimes. He did ask eyewitnesses if they noticed anything unusual about the perpetrator’s hand. None did. He did call a doctor from Johns Hopkins to testify, but the doctor merely read from the medical record. The attorney did not elicit an opinion from him as to whether or not Walter could have fired a gun. He did not call a hand expert to testify. He called the patrol officer who was out run by the suspect as a witness, but he did not show up. He did not call Walter’s sister who cared for him after the attack to testify to the extent of his injuries that left him unable to even care for himself at the time of the crimes.

Walter wrote to Centurion investigator Kate Germond after reading an August 25, 1994 article about her in The Evening Sun in which she tells the reporter that Centurion’s purpose “is to prove that they (our clients) are innocent, not get them released because of trial error or some legal technicality.” In his letter to Kate, Walter promises of his case “Once you look into it, it will become one of your success stories, because here lies a miscarriage of justice.” Walter’s correspondence with Centurion volunteers and staff in the coming years made a compelling argument for his innocence, but both Walter and Centurion found it tremendously difficult after more than 30 years to obtain the records from his case which we would need to proceed.

In June of 2002, Centurion committed to Walter’s case. Reinvestigating the Giles Food Market robbery so many years later was also challenging.  It was difficult to obtain records we needed. Under Maryland law at the time, Walter did not have the right to access his pre-sentence investigation and the court clerk only retained the trial transcript and other records for 12 years. At one time, Walter’s sister had a copy of the trial transcript but could not locate it after so long. Jim McCloskey eventually prevailed in obtaining the records, interviews, and experts to convince Judge Gale Rasin to reopen the case, with an agreement between Walter Lomax and the State to a modified sentence.

Among the reasons Judge Rasin cited in granting relief was the inappropriateness of the sentencing. Punishment is meant to insure public safety by deterring commission of future crimes.  Incarcerating an innocent person does not protect society. The decision specifically cited evidence of innocence presented by Centurion including:

Freed on December 13, 2006, but with the conviction on his record, Walter went on to pursue justice for himself and others. He defends the rights of prisoners who should be eligible for parole as the Founder and Executive Director of the Maryland Restorative Justice Coalition. With the encouragement of Judge Rasin, Baltimore attorney Billy Murphy filed a Writ of Actual Innocence in March 2014. The court vacated his conviction and on in April, the prosecution dismissed all charges. Walter was rewarded compensation from the Maryland Board of Public Works in 2020 for wrongful incarceration. Today, he is the founder and Executive Director of the Maryland Restorative Justice Initiative, a non-profit organization with a mission to advocate and promote humane and sensible criminal Justice and sentencing policies for those incarcerated long term in Maryland prisons. We are so proud of Walter and happy for him!