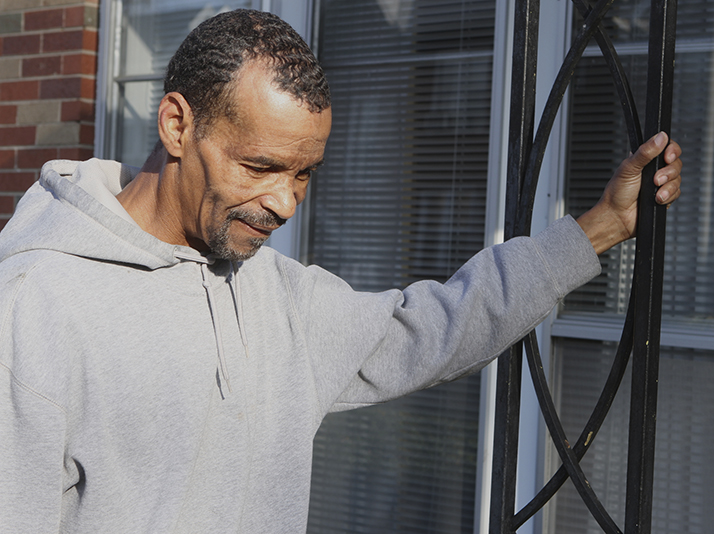 In 1983, Johnny Briscoe was convicted and sentenced to 45 years in prison for a St. Louis County, MO rape that he had no involvement in whatsoever. On July 19, 2006, receiving apologies from the county prosecutor, Johnny was freed and vindicated based on DNA testing that not only exonerated him, but also identified the real rapist.

Today, Johnny busies himself with doing odd jobs for neighbors. His family enjoys that he lives so much closer now.

On the night of October 21, 1982, a Black male forced his way into the apartment of a 28-year-old single Caucasian woman in the suburbs of St. Louis, and at knifepoint, he robbed her of jewelry and then sexually assaulted her at least three times, ejaculating each time. In between the assaults, three cigarettes were smoked – two by the victim and one by her assailant. The rapist engaged the victim in conversation and eventually asked her name. She identified herself and bravely asked him for his name. He told her he was John Briscoe. Before the rapist left, he indicated that he was going to call her. When he finally did leave the victim called the police.

The rapist called the victim three times between 4:15 a.m. and 5:10 a.m. The police were present for all three calls. He again identified himself as “John.”

Within 24 hours of the assault, police obtained a photo of the only John Briscoe in their files and developed a photo array to present to the victim. One of the photos in the array was the defendant’s, whose mug shot was in the police files for a stolen vehicle and attempted robbery charge in the mid 1970’s.

When a victim of one race must identify a perpetrator who is of another race, as in this case, it is called cross-racial identification. There have been many studies and research done on the phenomenon of cross-racial identification. Research consistently shows that a person of one race has an increased difficulty of accurately identifying a person of another race. Misidentification is the leading  cause of wrongful convictions. This factor may have played a part when the victim mistakenly identified Johnny Briscoe as her rapist after having viewed Johnny’s mug shot. One week later, Johnny was put in a live line up and the victim again identified him; however, Johnny was the only one wearing an orange county jail jumpsuit! The other three men in the line up wore civilian street clothes. Needless to say, the physical line up was simply for “show” purposes.

This case was rich with physical evidence that could have aided in the identification of the rapist through simple blood typing, yet blood typing was not done with any of the evidence. Furthermore, the defense did not challenge the fact that blood typing was not conducted. Bed sheets, bathroom towels, panty hose, and evidence collected during the examination of the victim all held the potential for scientifically identifying the real rapist because all tested positive for seminal fluid, however, it would be another four years before DNA typing would be applied to criminal cases. In addition to this evidence, the three cigarette butts and a Negroid head hair were collected.

An important note to keep in mind as the story unfolds is that according to the crime lab report dated October 26, 1982, the cigarette butts were “retained in the laboratory freezer for possible future comparison.” The other items of evidence were “sent to property control.”

Johnny Briscoe was convicted on the strength of the victim’s erroneous identification and false microscopic hair testimony. The county crime lab criminalist testified that the one Negroid head hair that had been collected from the victim’s bed sheets “matched the known head hairs from John Briscoe.” This is a complete  overstatement. At best, this type of examination could only allow that the head hairs were “similar” ” (i.e.: in color, texture, length, etc.) or “dissimilar.” Such visual inspection could not lead to irrefutably matching hairs to a specific person.

Johnny’s only defense at the trial was that he was home at the time with his mother and nephew watching the World Series. The jury, as is often the case, dismissed such testimony from these family members. As a result, Johnny was issued a 45-year sentence.

Johnny had written to The Innocence Project (NYIP) at the Benjamin N. Cardozo School of Law in New York in 1993.  For three years, the NYIP petitioned the courts and the St. Louis County prosecutor’s office to locate the evidence and allow it to be DNA’d. Both refused to do so! J.D. Evans, the First Assistant Prosecutor, wrote the NYIP in December 1996 that “we will neither conduct searches of our records nor turn over information unless…. ordered by a court to do so.” By May of 1998, the NYIP informed Johnny regrettably they could do nothing for him, citing the refusal by the judicial and prosecutorial authorities to search for the evidence, let alone submit it for DNA analysis.

In 1996, Centurion freed another St. Louis County man, Steven Toney, who the first Missouri person to be vindicated by DNA. On the day of Steve’s release from prison the last inmate to say goodbye to him was his friend Johnny Briscoe. Because Steve believed Johnny was wrongly convicted too, he suggested that Johnny write to Centurion for help. The first letter Centurion received from Johnny was dated July 30, 1996 and with that letter an extensive review of his case began.

CM went to court asking for yet another search and an accounting of the missing evidence. The Commander of the St. Louis County Police’s Bureau of Criminal Identification gave an affidavit on March 20, 2002 stating that the crime lab personnel had “searched the evidence storage freezers in an attempt to locate the three cigarette butts and the search failed to locate any evidence associated with Mr. Johnny Briscoe.”

Remember that in 1982 the crime lab specifically recorded the cigarette butts as “in the freezer for future testing,” and now the butts were gone without any record of destruction?! All the other pieces of evidence were also unaccounted for. Like NYIP years earlier, CM had also hit a brick wall.

A Miracle in the Making

Unbeknownst to Centurion and the St. Louis County Prosecutor’s Office the following developments were taking place:

In 2004 the St. Louis County Crime Lab had a power failure to its evidence storage freezer. This triggered an inventory of the items in the freezer at the time. The three cigarette butts from the Briscoe case were listed as items on the inventory sheet stored in the freezer.

At a DNA conference at St. Louis University in 2005 attended by St. Louis County Crime Lab personnel, CM exoneree Steve Toney spoke about his experiences as a wrongfully convicted lifer saved by DNA. Steve knew about the missing evidence in the Briscoe case and mentioned Johnny as an example of another innocent man who probably will not see the light of day due to a tragic disappearance of the case’s forensic evidence.

Provoked by Steve’s remarks, the lab’s supervisor ordered a search for the Briscoe evidence in their freezers. The cigarette butts were located in November 2005.

On its own initiative, the lab conducted DNA tests on the butts in May 2006. A female DNA profile was obtained from two of the butts and DNA from the third butt was a mixture of the same female DNA and an unknown male.

In June of 2006 through CODIS the unknown male on the third cigarette was identified as a known convicted rapist, Larry Smith. Finally, the lab notified the St. Louis Prosecutor’s Office of these developments.

The prosecutor immediately recognized the case. Samples were collected from the victim on July 10, 2006 to confirm that she was the source of the female DNA on the three cigarettes and confirmatory samples were also obtained from Larry Smith and Johnny Briscoe. Briscoe was cleared and Smith was confirmed as the donor of male saliva on the third cigarette.

On July 19, 2006, just three days after hearing the good news of his exoneration, investigators from the prosecutor’s office personally escorted Johnny Briscoe from prison to his mother’s home.

It is interesting to note that while incarcerated Johnny Briscoe had heard that Larry Smith had committed the rape for which he was convicted. In 1995, they ended up in the same prison and Johnny confronted Smith with this information. Smith, of course, denied it. Johnny did not know Smith prior to being arrested for his crime, but he had heard about him on the streets of St. Louis. Why and how Smith decided to identify himself as “John Briscoe” to the victim remains a mystery.