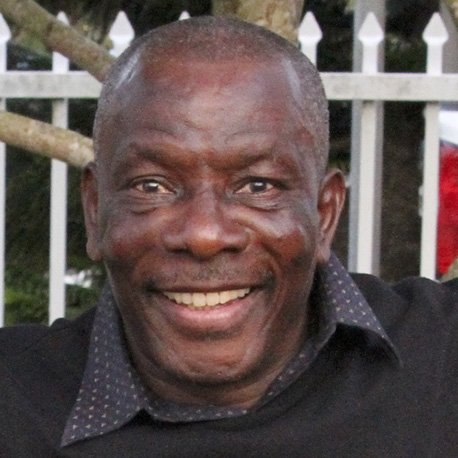 Sentence: 4 concurrent terms of natural life with 225 days credit for incarceration prior to sentencing

Jules Letemps served more than 27 years for an Orlando, FL, sexual assault and kidnapping he did not commit. Another man, armed with a knife or metal object attacked the victim at a bus stop near Jules home at around 4:30 or 5a.m. on May 29, 1989. The rapist forced her to undress and sexually assaulted her three times before she escaped, nude to the home of a Good Samaritan who gave her his robe and called police. When the police arrived, the distraught victim gave them a very general description of her attacker. She told police she would not go to the hospital to be examined and to provide a rape kit, rather, she wanted to go home and clean up.  Hours later, after meeting with police, returning to her home, and showering, she returned to the area of the assault in a car with family members to search for the attacker. When she saw Jules walking to work, walking to work, they called the police who arrested him.

The only physical evidence which could have implicated or exonerated Jules was a semen stain on the robe the victim wore following the attack.  The Florida Department of Law Enforcement (FDLE) technician who conducted serological testing on the stain reported, in error, that there was too little semen for a valid analysis. Jules’ defense attorney did not investigate the accuracy of the analysis but instead had it suppressed at trial. The jury convicted Jules based solely on the victim’s identification.

Before Centurion reinvestigated Jules’ case he had attempted to prove his innocence and regain his freedom by filing more than ten unsuccessful motions and petitions from prison, assisted only by other prisoners. He had exhausted every judicial relief.  Our investigators found errors in the FDLE analysis of the semen stain which his attorney had not even investigated as well as other failures by his counsel. These findings convinced Judge Gregory A. Presnell to grant Jules’ petition for Writ of Habeas Corpus on July 20, 2015. A dismissal of all charges followed. 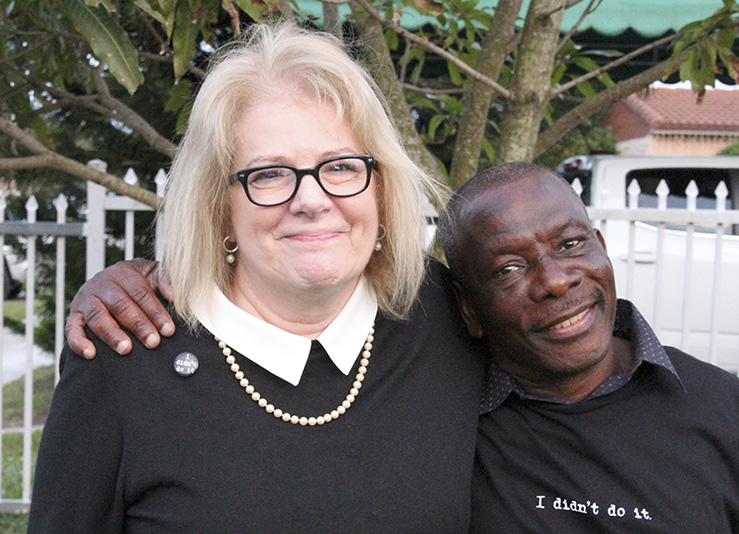 A black man armed with a knife or other metal object attacked the victim at a bus-stop near Jules Letemps’ home in Orlando, FL, on May 29, 1989, at 4:30 or 5:00 am. He sexually assaulted her three times. A car drove by and startled the assailant.  The victim realized that the rapist no longer had the weapon, she escaped running and crying to the home of Sherman Williams, who gave the nude victim his robe and called police.

When police officers took the victim’s statement immediately following the attack, she insisted that she did not want to prosecute anyone and signed papers saying so. About three hours after the crime, the victim and some of her family members returned to the area of the attack, near the bus stop at Church Street and Cottage Hill Road in Orlando. They drove around the neighborhood in a car, hoping to find her attacker. When they saw Jules Letemps, a black man dressed similarly to her attacker walking to work they contacted police saying they had found the rapist. Officer Ford, the arresting officer followed the victim and her cousin. They pointed out Jules walking along the street. Officer Ford arrested him. The victim made her formal identification to police officers when she saw Jules in the police car, immediately following the arrest.

It is important to note that in his police report, Officer Ford, wrote that he followed the victim and her cousin “to the 300 block of Cottage Hill Road where they pointed to a black man who was walking northbound on the west side of the street.”

Officer Linnenkamp responded to the call from Sherman Williams, the owner of the home that the victim escaped to following the assault. He was not able to get much information from the victim who had just arrived in the US from Puerto Ricco, was crying, and spoke very little English. Officer Linnenkamp called Officer Viamontes, who speaks Spanish, to take the victim’s statement. She told them the attacker was a short, black male, wearing a two-toned multi-colored shirt and blue jeans. She did not mention that her attacker only spoke Creole.

After the officers took her statement, the victim told them that she did not want to prosecute and refused to go to the hospital. Police dropped her off at her home where she showered. Since the victim refused to go to the hospital, no rape kit was taken and the only physical evidence of the attack or attacker was a semen stain on the robe that the homeowner loaned to her when she arrived at his home nude, seeking assistance.  She had discarded the robe in the trash when she was at home.

In 1989, DNA analysis was available to implicate or exclude suspects in sexual assault, however the forensic analyst chose to use serology.  In fact, in 1987 Orange County Florida (the same county Jules case was in), was the first state to use DNA to convict a rapist. Serologic or blood type evidence was often useful, but its application was limited by the “secretor” status of the suspects and victims. A “secretor” is someone who secretes blood type indicators in their other bodily fluids.

Nancy Rathman, a forensic analyst for the FDLE chose to use serology rather than DNA to analyze the stain on the robe worn by the victim after the attack.  Ms. Rathman was looking for blood type indicators. In an October 24, 1989, report of her analysis she stated that she detected semen and “O” blood group indicators in the stain. She then analyzed the blood and saliva of the victim (blood type “O”), and Jules Letemps (blood type “B”) and determined that both the victim and the accused are “secretors”. Rathman then further analyzed the stain to determine if the concentration of semen was high enough to detect the blood type of the rapist. She reported that the semen concentration was too low to provide conclusive information about the source of the semen.

At the time of the crime, Jules was at home, in bed with his partner, Wendy Partee with whom he has three children. An adult friend was also living with them at the time. Both Partee and the friend testified in support of his alibi. Additionally, Letemps said that his roommate woke him around 6:30 am to get ready for work, that he left his home which was south of the crime scene at about 7 am, and was arrested while walking from his apartment to work at a Toyota dealership north of the crime scene.

Identification was the sole issue at trial. Two components of the identification of Jules Letemps are particularly noteworthy; the direction Jules was walking when he was arrested, and the serological analysis of the semen stain on the robe, the only physical evidence of the rape.

The arresting officer, Officer Ford testified falsely at trial that Jules Letemps was walking in a southbound direction when he was arrested, therefore indicating that he was returning home, rather than leaving for work.  However, Officer Ford had stated in his written report that Jules was walking northward at the time of the arrest.  The direction Jules was walking when arrested supported his alibi that he had been home at the time of the crime and was walking to work when arrested (northbound).  Jules’ attorney did not challenge Officer Ford on the inconsistency between his written report and his testimony, thus allowing the jury to think he was walking away from the crime scene when he was pointed out by the victim and arrested.

Mr. Letemps’ trial counsel did not investigate the serological analysis of the physical evidence (the semen stain on the robe) which the FDLE technician called inconclusive. She accepted the FDLE scientist’s erroneous conclusion that her analysis could not exclude Mr. Letemps as the rapist because there was too little seminal fluid present in the stain to assure detection of blood group factors. She moved instead to suppress the evidence at trial. The jury was told that the serological analysis was inconclusive. They convicted Jules Letemps of all charges.

In 2010 Centurion’s Kate Germond and attorney Paul Casteleiro began investigating the case and discovered new evidence that Jules Letemps was actually innocent and that he had been denied due process as a result of ineffective counsel.

Centurion uncovered a 1989, videotaped deposition of Nancy Rathman, the FDLE technician who reported that analysis of the semen stain was inconclusive, which was previously unknown to the defense and was not even transcribed until July of 2011.  Centurion hired a nationally recognized serology expert and the company (SERI)  that created to test that Rathman incorrectly used.  Both read the videotape transcript and discovered that Rathman had used the wrong standard to calculate the concentration of semen in the stain. Rathman’s calculation using the wrong standard resulted in a semen concentration too low to assure that blood type indicators, if present would be detected. Calculations using the correct standard would have found the concentration sufficiently high to conclude that no blood type “B” indictors were present in the stain and exclude Jules Letemps as the attacker.

With the new evidence of Jules’ innocence, Centurion filed another motion for post-conviction relief in Florida State courts. The trial court rejected the motion as being untimely and the court of appeals affirmed that decision. Undeterred, Centurion then sought permission from the United States Court of Appeals for the Eleventh Circuit to file a second petition for Writ of Habeas Corpus. The federal court granted permission.

United States District Court Judge Gregory A. Presnell granted the habeas petition and ordered a new trial. In granting the petition, he found that the trial counsel’s failure to investigate and present the serological evidence and to cross-examine the arresting officer regarding the direction Jules was walking when arrested deprived him of his right to effective assistance of counsel. Regarding the claim of actual innocence, Judge Presnell stated, “Letemps has presented a credible claim of actual innocence. The unrebutted testimony of the robe’s owner…that no one other than himself wore the robe before he gave it to the victim established that either he or the rapist must have been the donor of the semen…found on it (and because neither the robe’s owner’s,  nor Letemps’ blood group substances were contained in the semen stain it means) that the rape was committed by someone other than Letemps.” Letemps v. Secretary, Florida Department of Corrections, 114 F. Supp. 3d 1216, 1225 (M.D. Fla., 2015).

The State did not appeal Judge Presnell’s decision and the case went back to the Circuit Court of the Ninth Judicial Circuit in Orlando for retrial. There Centurion presented three nationally recognized serology experts who all stated based on the blood group testing that Jules Letemps was excluded to a scientific certainty as being the assailant meaning, as stated by Judge Presnell “the rape was committed by someone other than Letemps.”