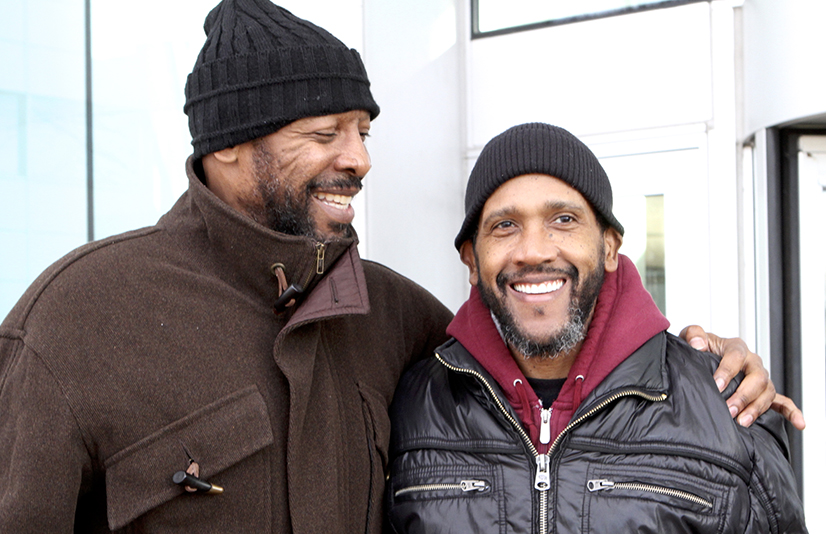 Ralph Lee spent more than 24 years in a New Jersey prison, wrongfully convicted of robbery and the murder of a young video store clerk, Tito Marino. He initially denied involvement but after his alleged accomplice Eric Kelley confessed, detectives interrogated Ralph again and elicited a false confession very similar to Kelley’s. Ralph almost immediately recanted the confession and presented a number of witnesses in support of his alibi defense. He was convicted and sentenced to life in prison, and ineligible for parole for 33 years. Eric Kelley was also convicted in a separate trial. Neither Ralph Lee nor Eric Kelley had anything to do with the crimes.

During his time in prison, Ralph fought tirelessly to prove his innocence. In 2010, Kelley obtained a court order to conduct DNA testing of several items of evidence recovered from the crime scene using new technology.  The testing wasn’t completed until December 2014 and it showed that a third party, a man who had committed a similar robbery three years earlier was likely the murderer. In 2015, Centurion took Ralph’s case. As Ralph’s prospects for freedom improved, his health declined to the point that he could not make several court appearances. A new trial was ordered in September of 2017, and he was finally freed on bail on November 8, 2017, to await retrial. On April 6, 2018, the Passaic County Prosecutor, Camelia Valdes decided not to retry the case.

With support from his family and Centurion, Ralph is finally getting his life back.

The crime.  In the early afternoon of July 28, 1993, an unknown person robbed the Victoria’s Video store in Paterson, NJ, and brutally murdered the young store clerk, Tito Merino by repeatedly stabbing him. The perpetrator escaped with cash, video tapes, watches and other items. No finger prints or murder weapon were ever recovered.  A green and purple plaid baseball cap found near the victim’s body was the only physical evidence that could possibly implicate the murderer.

Three customers told police that they believed they had encountered the perpetrator. Carmen Paredes reported rubbing against or bumping into “a black guy” wearing the green and purple plaid baseball cap around 1:20pm or 1:25pm. Majdi Moussa reported seeing a tall black man come from the back room of the store, where the victim’s body was later found, at approximately 1:30pm when he entered the store to return a video he had rented. The man he saw was bleeding from behind his ear and had blood on his shirt. James Thompson walked into the store during the estimated time of the victim’s death and was told by a man crouching behind the counter that the store was closed. Mr. Thompson had never seen this man before, though he lived in the neighborhood and was a regular customer of the family owned and manned store.

The arrest and false confessions.  A tipster called police shortly after the crime to report a conversation she had overheard between three women at a laundromat. According to the tipster, the women said the robbery and murder were committed by two black men and a white man working together. The police never spoke to the women who allegedly were talking in the laundromat and the next day a confidential informant reported seeing two black men from the neighborhood, Ralph Lee and Erik Kelley and a  white man , in the area of the video store at the approximate time of the crimes and that two of three men were at that moment together at an apartment building on Jasper and Union streets.

Detectives Richard Reyes, the lead investigator on the case and his superior Louis Stell found Eric Kelley and Ralph Lee at that apartment building, and both were brought to the police station for questioning about “an incident.” Kelley and Lee were taken to the station in separate police vehicles. At the station they were interviewed separately, Kelley by Detective Reyes and Lee by Detective Stell. Kelley, who suffered a brain injury in a car accident as a child which has impacted his cognitive capacity and is highly suggestible confessed. In his confession he admitted that the hat found at the crime scene was his. He also implicated Ralph Lee and David Hancock in the crimes.

Ralph originally denied any knowledge of the murder and Stell was ready to release him when Detective Reyes informed Stell that Kelley had confessed and implicated Ralph Lee. The detectives arrested Ralph, read him his Miranda Rights, and by their own accounts started feeding him little bits of information about the crime to make Ralph believe they knew that he was involved. After some discussion he also confessed. The confession was typed, but there was no audio or video recording of the confession or any of the interrogation process. The details of Ralph Lee’s confession were almost identical to Eric Kelley’s confession but all of facts contained in the confession were known to the police at the time of the interrogation and none of the alleged facts could be independently corroborated. Police later arrested the alleged third accomplice, David Hancock but he refused to submit to any questioning by the police. His case was dismissed after he spent three in jail awaiting trial when both Ralph Lee and Eric Kelley refused to testify against him.

In additions, details in the confessions did not match the facts of the crime as reported by the witnesses or as evidenced by the crime scene.

Several witnesses for both the defense and the prosecution placed Ralph Lee in the neighborhood but not at the crime scene around the time of the crimes. He was first seen at St. Mary’s food pantry at approximately 1:15pm, then outside his sister’s apartment a few minutes after 1:50pm approximately four blocks from the video store, where he joked around with two acquaintances  while they helped to repair a broken down van. No witness reported seeing blood or scratches or any evidence on Ralph’s person to suggest his involvement. At trial, the defense used the witness testimony placing him at these locations to support their argument that it was impossible for him to commit the crime while the prosecution used it in support of their argument that he was in the area and committed the crime.

Centurion worked together with The Innocence Project to reinvestigate the crime on behalf of our client Ralph Lee and The Innocence Project’s client Eric Kelley, with the goal of obtaining a new trial for both. A motion filed on their behalf led the trial court in 2010 to order retesting of DNA evidence from the 1996 trial using new technologies. New analysis of DNA on the green and purple plaid hat found at the crime scene revealed DNA of a known criminal, Eric Dixon on the hat and excluded both Eric Kelley and Ralph Lee as DNA contributors.  With this newly discovered DNA evidence both defendants filed motions for new trials. At the evidentiary hearing on the new trial motions  Centurion and The Innocence Project presented the new DNA evidence, expert testimony on crime scene reconstruction, expert testimony on police interrogations  and how false confessions occur and expert testimony on the psychological makeup of Eric Kelley and how that possibly influenced his interrogation. In addition, the testimony of James Thompson was presented. Mr. Thompson testified he  told police he knew both Eric Kelley and Ralph Lee and when he entered the video store he saw an unknown black man, a person he had never before seen, crouched behind the customer counter. Police never took a written statement from Thompson although they took statements from every other person who entered the store from the time the victim was last seen alive to the discovery of the body. The hearing encompassed 9 days of testimony between September 2016 and January 2017. The experts included:

The State called Det. Reyes as the only rebuttal witness.

On September 15, 2017, the trial court granted both defendants a new trial. They were freed on bail with electronic monitoring on November 8 2017, pending the State’s appeal of the Order granting them a new trial.  On appeal the State appellate court affirmed the trial court’s order granting Lee and Kelley a new trial. On April 6, 2018, Lee and Kelley returned to court with their attorneys on what they expected would be a routine, electronic monitoring issue and learned that the Passaic County Prosecutor, Camelia Valdes had decided to dismiss all charges.

The court cited many factors in its decision to order a new trial.  The new analysis of DNA evidence on the cap found near the victim was understandably a leading factor.  It proved that Eric Dixon, who had committed a similar crime three years earlier and not Ralph Lee, was the “habitual user” of the hat. The court said that fact alone was “capable of raising a reasonable doubt as to the guilt of both defendants and [creating] a link between a third party and the crime” which would “probably change” the verdict. The court further commented that “in the totality of the circumstances and in the shadow of the new DNA evidence,” other arguments presented by the defense became more “compelling,” and other testimony potentially more significant. The court also cast doubt on some testimony in light of the DNA evidence and on the confessions by Ralph Lee and Eric Kelley in light society’s growing awareness of false confessions. Paul Casteleiro, Centurion’s Legal Director represented Ralph Lee and he notes that in addition to the new DNA evidence, the court found the expert crime scene reconstruction testimony by Timothy Palmbach establishing that the murder could not possibly have occurred as stated in the confessions of Lee and Kelley particularly compelling new evidence.

Wrongful imprisonment for 24 years has cost Ralph Lee far more than time. While Ralph was fortunate to maintain relationships with his family in prison, his health has suffered. With the support of his family and Centurion, Ralph has found work and moved into an apartment up the street from his family and is in the process of reclaiming his life.